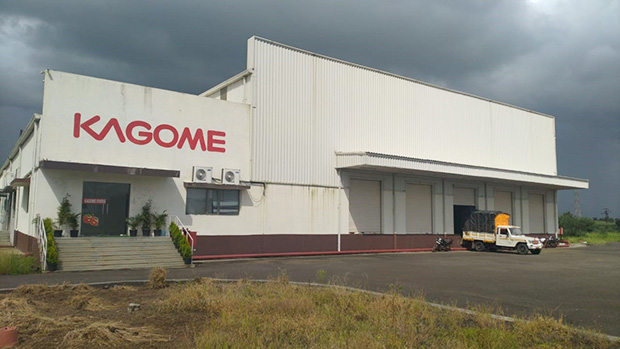 The company, which entered the country in 2013 in partnership with a local firm and terminated the joint venture in 2016, has invested 500 million rupees ($7 million) in its own plant at Nashik in the western state of Maharashtra, Rohit Bhatla, managing director of Kagome Foods India Pvt. Ltd., told NNA.

“We were in the process of setting up our own operation since 2016…We did market research for two years, and finally commenced our commercial operation in March this year,” Bhatla said in a phone interview with NNA on Oct. 16.

As for the failure of Ruchi Kagome Foods India Pvt. Ltd., the joint venture with India’s fast-moving consumer goods maker Ruchi Soya Industries Ltd., he said, “There was some disconnect between the plans of the companies,” declining further comment.

The factory has annual production capacity of 20,000 tons of processed tomatoes such as crushed tomatoes, tomato puree and sauces. Kagome’s local unit plans to fully utilize the facility by the end of 2022, he said.

Also, to ensure a constant supply of raw tomatoes, the local arm has launched a contract farming program for farmers around Nashik.

“This initiative was launched around one-and-half years ago under which we give farmers tomato seeds, help them produce quality tomatoes, and buy back those products from them,” Bhatla said, without disclosing the scale of its procurement.

“Instead of buying fresh tomatoes from the market, which fluctuate in price and quality, you have a consistent product in quality and price, offering users great convenience,” he added.

It has also introduced products such as a tomato makhani gravy base, Italian pizza and pasta sauce, and a tomato soup base to meet growing demand from hotels and restaurants, including fast-food outlets looking for “cost-effective, quick and easy-to-use tomato-based products,” according to the managing director.

Bhatla added the Indian unit will only focus on producing preservative-free processed tomato products, and has no plans to launch its ketchup in the South Asian country in the near future.

The company has sold its products in six Indian cities including New Delhi, Mumbai, Bengaluru and Kolkata, and plans to launch these in more cities as it expands.

In 2013, Ruchi Soya Industries announced the establishment of Ruchi Kagome Foods India with Kagome and Japanese trading house Mitsui & Co., but the Indian firm divested its 40 percent holding in 2016, according to Ruchi. (NNA/Kyodo)

How can we help you?

To know how Kagome Foods India's Tomato Solutions can add value to your business, Book your Free Demo today.